The toponym of Melide is derived from the Latin name Mellitus. Initially, it would be a villa(m) Melliti 'farm development unit' or 'farming of Mellitus'. Thus, it is a Latin anthroponym, related to the owner's or landowner's name in the genitive case. Like other Medieval villae, and with the passage of time, this rural farming is going to become into a urban and concentric population centre.

Abeancos' territory -what is nowadays the land of Melide- is mentioned for the first time in the so-called Odoario's testament -a document from Lugo dated from the year 747-, and we can find in it some places where Melide is not referred to. There appear some current villages like Zaramil (Villa Salamini), Paradela (Paratella) or Buente (Boenti), but not Melide. First historical reports of Melide date form the middle of the 10th century and from the beginning of the 11th century, just after the discovery of James The Elder's sepulchre in the first third of the 9th century. This occurrence is going to cause an unstoppable movement of the Christian world towards Santiago de Compostela. The French Way is going to pass through Melide, and to converge with the Primitive or Oviedo Way. This historical fact will mark the origin of new settlements and the developmento of the ancient Abeancos' territory, among them the town of Melide.

In the 9th century, the Asturian monarchy, owner of Abeancos' territory, promotes the construction of a fortress on the remains of a Neolithic fortified settlement, around which the old Melide burg was set up. The decision was justified by the infightings for the possession of the domains and for the control of near communication routes and the external threats derived from the Arab invasion.

From the 9th century, the incessant rise of the pilgrimages to Santiago de Compostela will make conditional to the urban development of the environment of the castle or fortress, giving rise to the formation of the new burg of Melide. Groups of traders and artisans decide to establish permanently along the two main access roads towards the castle -now the French and the Oviedo Ways- attracted to the walkaway of pilgrims, so crowded and sure. Outside the burg, Medieval artisans, traders and innkeepers establish their residence, just next to the entrance of the castle and along the way – current Principal street-, setting up a suburb (suburbium), called new burg (novus burgus) by the written records from that time, in contrast to the feudal or old burg (vetus burgus) which it was attatched to. At the end of the 16th century, a large number of the population of Melide was still formed by innkeepers.

In 1320, the village is favoured by a toll with the fortress of its burg. These achievements are obtained by archbishop of Santiago de Compostela, Berenguel de Lendoira, who is very grateful to Fernán Fernández de Abeancos -the owner of the village at that time- for his help. The fence encloses the commerical centre in order to defend it against possible assaults and plunderings.

There are no remains from those walls, because they would be probably demolished during Irmandiña's revolts. In the session dated form 12 January 1841, the government of town decided to put up for auction the last remains. 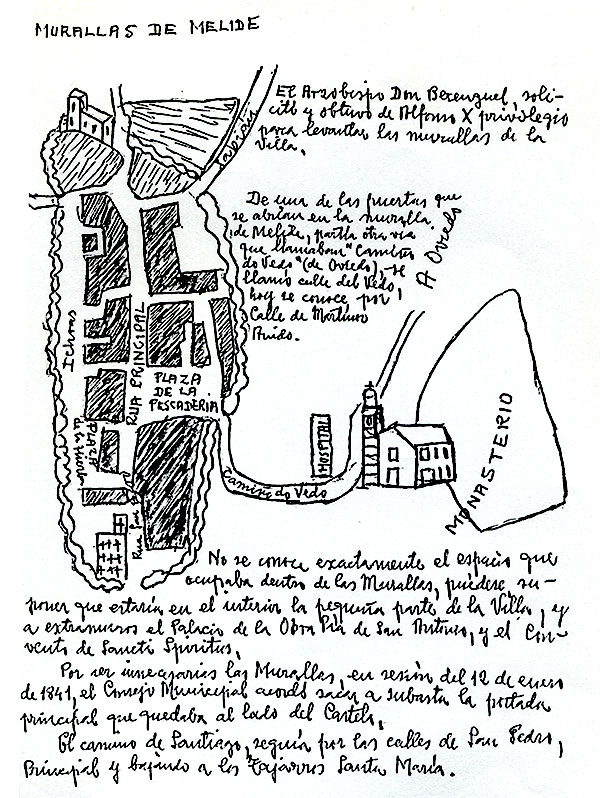 Trade and crafts community will quickly place across the straight limits of the walls and they will first settle in both sides of the pilgrimage ways (French and Oviedo Ways) in order to expand into next pieces of land little by little.

Thus, trade community will promote the construction of St. Peter Church outside the fortified enclosure, just next to the Ways of St. James. Afterwards, and close to it, it will appear the first Medieval hospital for pilgrims -where the current Terra de Melide Museum was built- and the first Franciscan Sancti Spiritus monastery, founded in the 14th century. 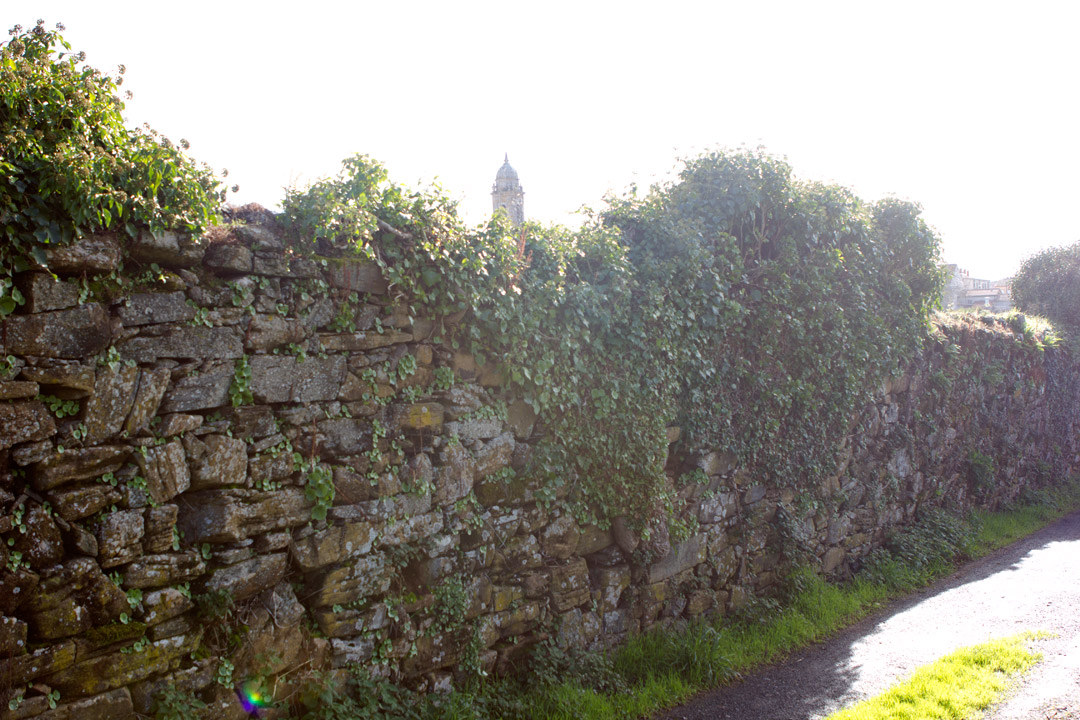 Between the years 1467 and 1469, the government of the Holy Brotherhood of the Old Kingdom of Galicia -the origin of current Regional Government of Galicia-, is goint to have five important meetings. The first one, and the beginning of the above mentioned Regional Goverment of Galicia, is going to be developed in Melide. The town was chosen because of its priviledge location: “Because it was in the middle of the Kingdom”.

In the 15th century, new lineages appear or adquire a social and political meaning -the Ulloa among them- that did not have such importance in Galicia before. They will dominate Melide during the whole century. Architecturally speaking, the most remarkable fact made by the Ulloa lineage was the reconstruction of the Sancti Spiritus convent in the year 1498, promoted by Sancho Sánchez de Ulloa.

It is from the 17th century the foundation and construction of the Obra Pía of San Antón, a Baroque Galician country house with a chapel, mainly devoted to teaching.

During the 18th century, the church of the Sancti Spiritus convent was extended and the current Baroque façade was also built.

The confiscation of the convent was carried out in 1835. After being abondoned, the building turns into parish church.

Melide will also have its importance during the War of Indepedence. Napoleonic troops were established in Melide in June of 1809. They were batallions that French Marconet, who occuppied the city of Santiago, established in the village of Melide. The presence of French soldiers in Melide provoked that villagers mobilised against them. The inhabitants started launching attacks against the French soldiers and causing casualties on them.

Then, General Marconet decided to reinforce the garrison of Melide with fresh troops. The major of Monforte de Lemos battalion, Antonio Ponce, discovered the arrival of reinforcements and, accompanied by the Franciscan Conde priest, he commanded to meet the French. On 17 June 1809, the advance guard (soldier party that gets a move on the main group in order to trace the enemy closer or to investigate their situation) fought with a French party that had left Melide in order to search for supplies in its small villages and they killed seven French soldiers, and forcing the other soldiers to flee.

According to the report that the major of the aforementioned battalion from Monforte de Lemos, José Quiroga, sent to the Marqués de la Romana, he worked out the presence of at least 3.000 French soldiers accompanied by enough cavalry. The battalion from Monforte de Lemos counted on no more than 800 soldiers, and more than half of them lacked firearms and even those who had rifles did not have any bayonets. Convinced that his troops were brave and courageos, the major made a stop in San Benito (Santiso Council) and decided to attack French soldiers in Melide. In the morning of 18th August, the battalion from Monforte is strategically located at the main entrance of Melide. Protected by planks (like parapets) and by the fences of the fields, the French located at the top of O Castelo open fire against them and continue advancing towards Melide. According to the minister of the Franciscan convent, the battalion from Monforte, together with Melide villagers -some provided with weapons and others with pointed sticks-, advanced fearless towards the French and these backed off and run away, even leaving behind their dead soldiers.