Melide is the capital of Terra de Melide region, which is made up of the councils of Melide, Santiso, Toques and Sobrado. Talking about its collection of historical monuments, it is the most interesting village in the Galician itinerary of the French Way.

The current St. Roque Chapel, placed in the Cantón de San Roque, was built in 1949 with materials from the demolished Medieval churches of St. Peter and St. Roque. The main façade, one of the most beautiful in Medieval Galician art, comes from the ancient St. Peter church. It is framed by two buttresses and made up by three semicircular archvolts, including elements which are clearly related to Gothic aesthetics. We can date this church in the 14th century, because of its columns with small shafts and with high bases and capitals decorated with vegetal motifs. 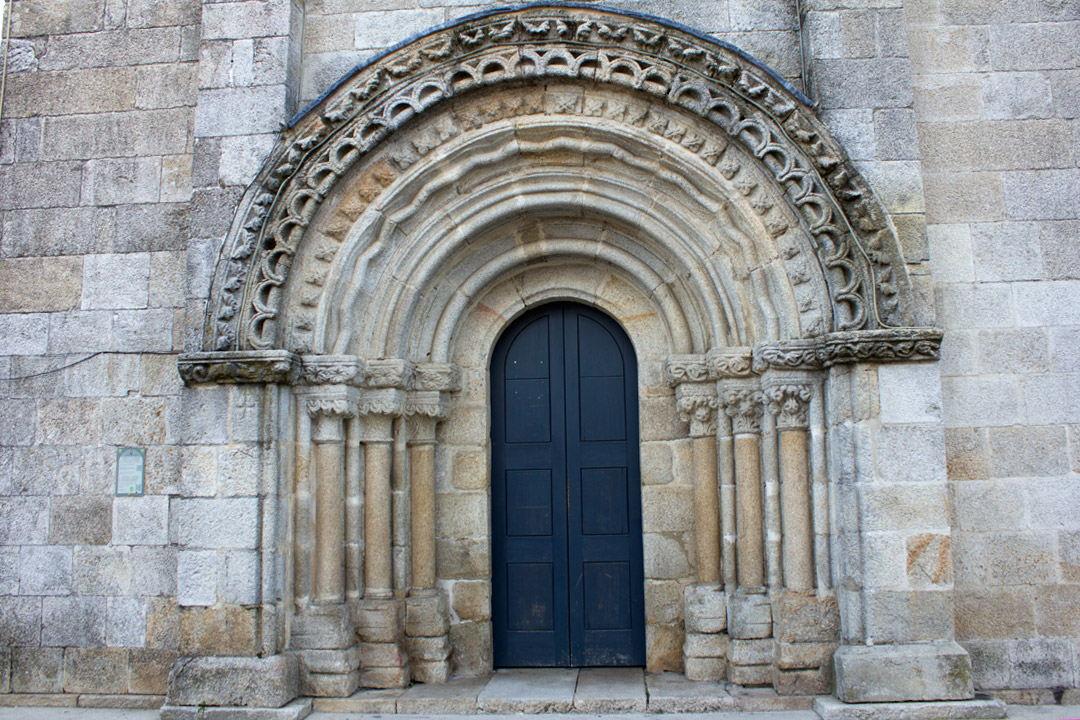 There is inside an altar dated from the 19th century, in whose chapel we can see an image of St. Roque.

There also are Medieval sepulchres preserved in this church. They belong to Roi Lopez -and his wife Inés Eanes- and Diego García, both of them the notaries from Melide.

Next to the church, it is placed what for many is the eldest transept in Galicia, probably dated from the 14th century. The front represents a crwned seated Majestic Christ, showing his wounded hands, with his legs covered by a cloth. The back represents the Calvary. 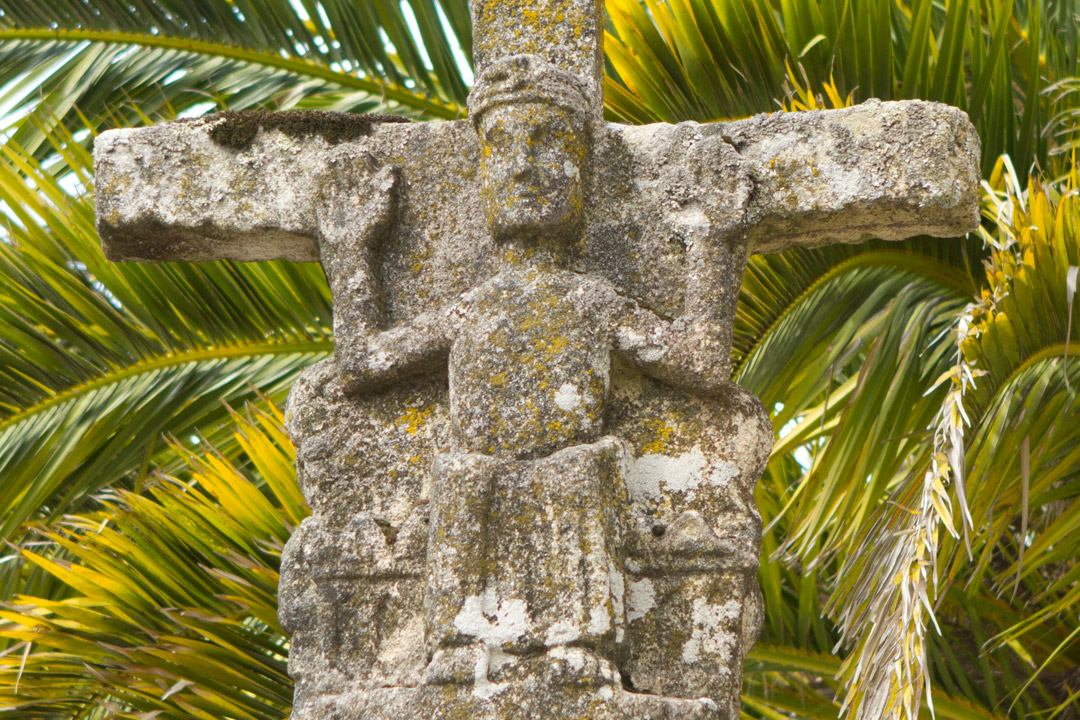 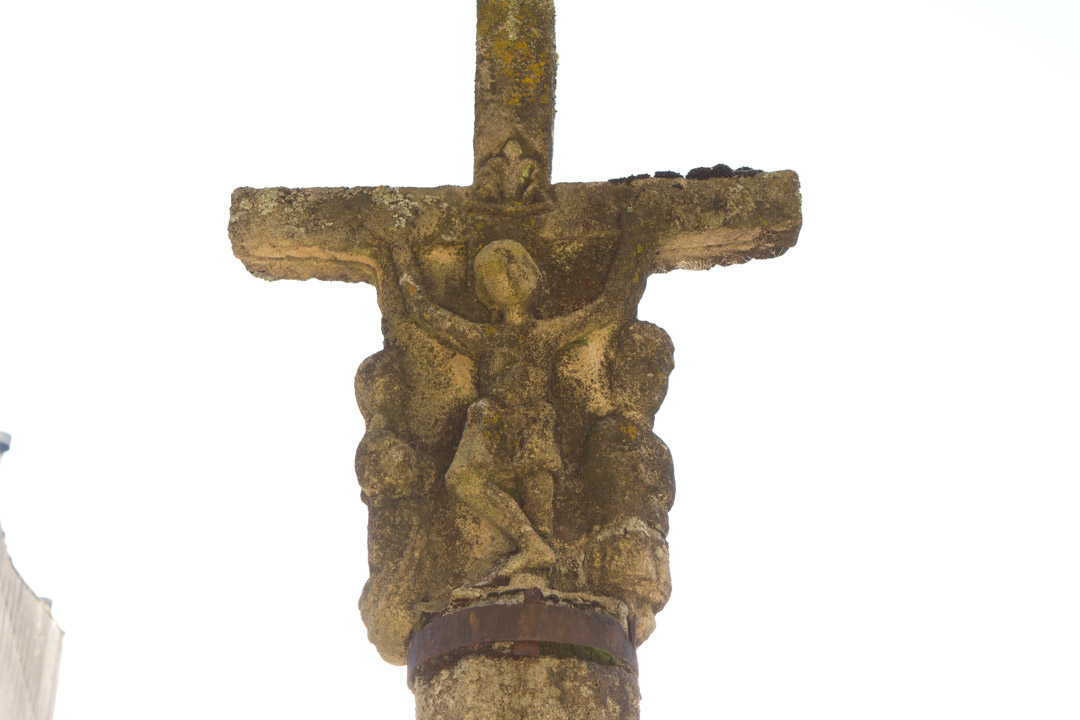 Sancti Spiritus Church belonged to the missing monastery or convent of the Third Order of St. Francis, which was founded in the 14th century. It is a nice example of duration in time and space. From the ancient church it is only preserved a small side chapel, with a vault and a pointed triumphal arch. It is called Saint Christ chapel, maybe because it could have the current figure of Christ that we can see in St. Anthony chapel. The triumphal arch stands on two columns. It is only preserved the capital on the left column, which is decorated with ribbons. There is another capital fitted in a back wall, which could be the one on the right column. Nowadays, we can see in the chapel an altar of the Virgin of Mercy, dated form the 18th century. 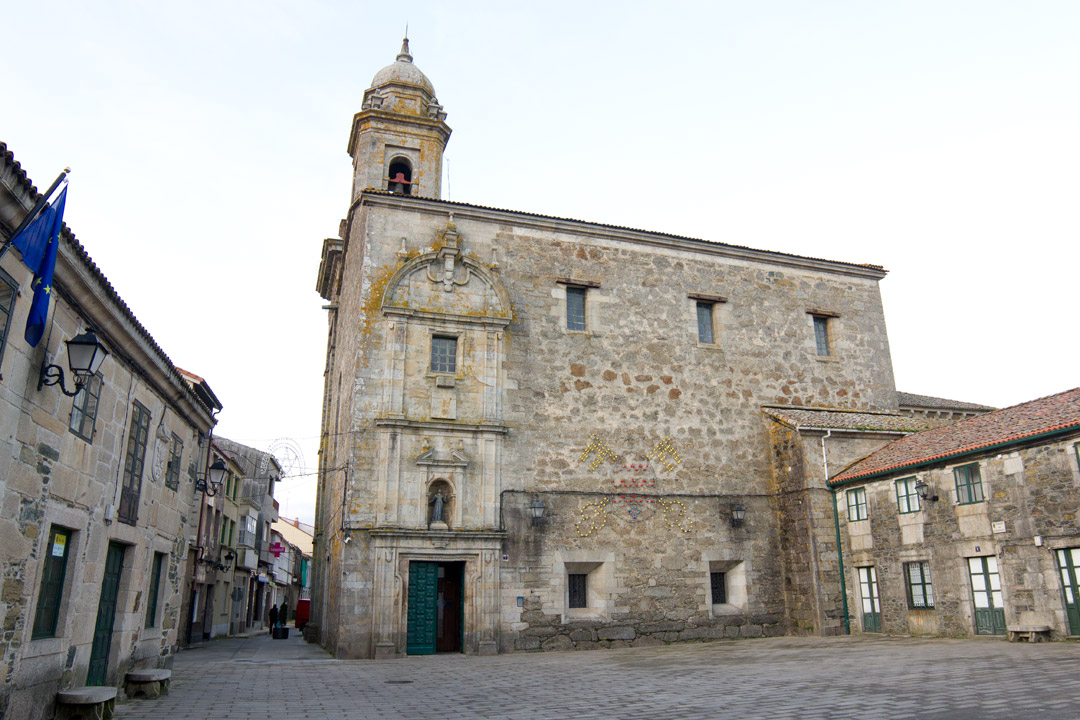 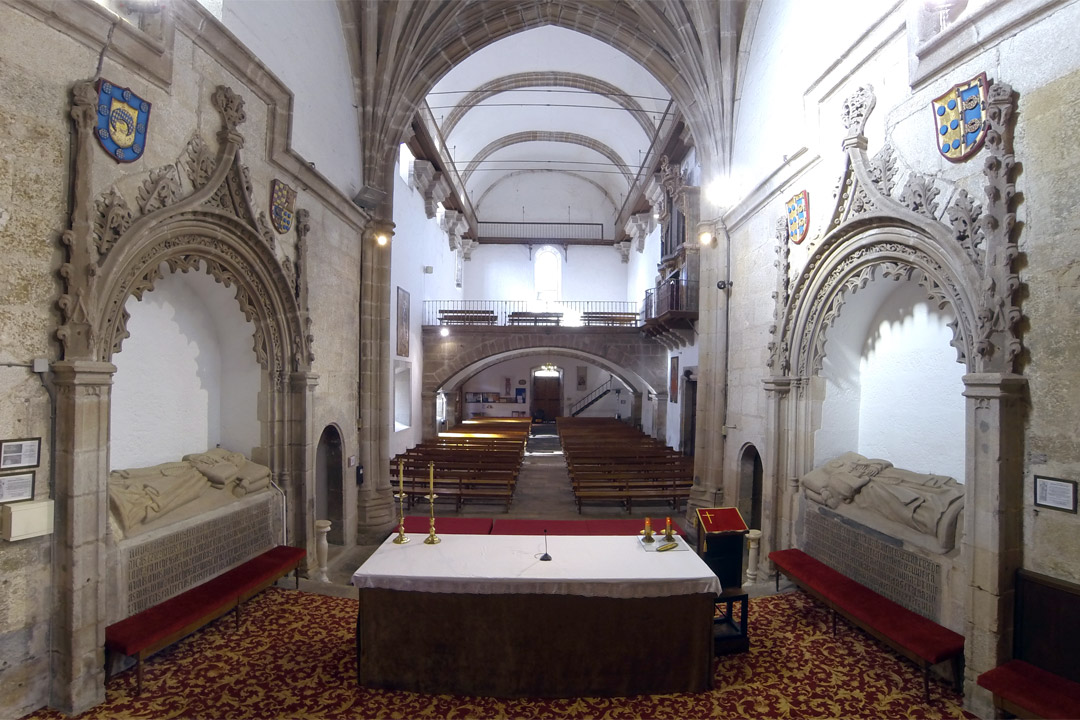 In the 14th century, and more precisely in the year 1498, Sancho Sánchez de Ulloa decides to reconstruct the church of the convent -demolished during Irmandiña revolts- in memory of his mother, Inés de Castro. Masters Xan do Llano and Xan Casal will be put in charge of the work. The result was a church with a ribbed vault rectangular apse.

The two side Gothic sepulchres are also dated from this time. These are two cenotaphs in memory of Leonor de Mendoza and Inés de Castro, Lope Sánchez de Ulloa's first and second wifes, respectively. 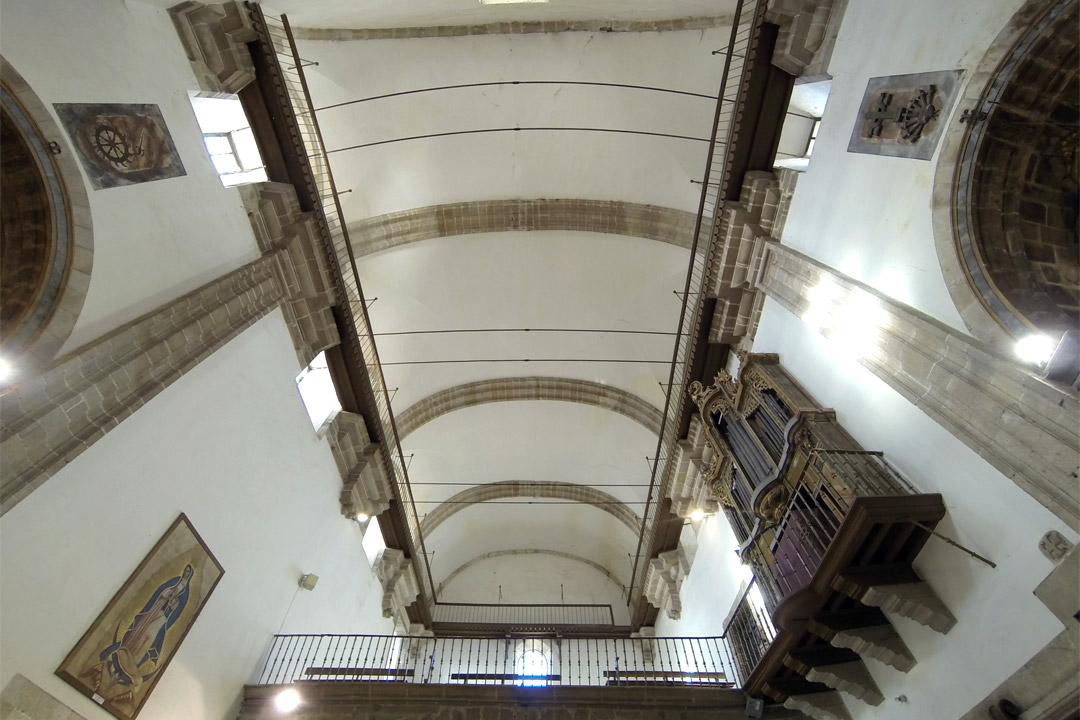 Both sepulchres rise with columns and rounded arches, which are decorated by pinnacles and they finish in an ogee arch. Images are dressed by the Franciscan habit, including a rosary between hands and clothes shaping wide creases. At the front of both sepulchres, we can see genealogical inscriptions about these two Galician noblewomen, who played a leading role in the Middle Ages.

During the 18th century, and like in almost all monasteries, extension projects would be carried out in the church. They will only left the 14th century side chapel and the 15th century main chapel. The nave will be extended with the construction of a barrel nave, which is divided into four segments separated one from another by transverse arches springing from corbels connected through arches. 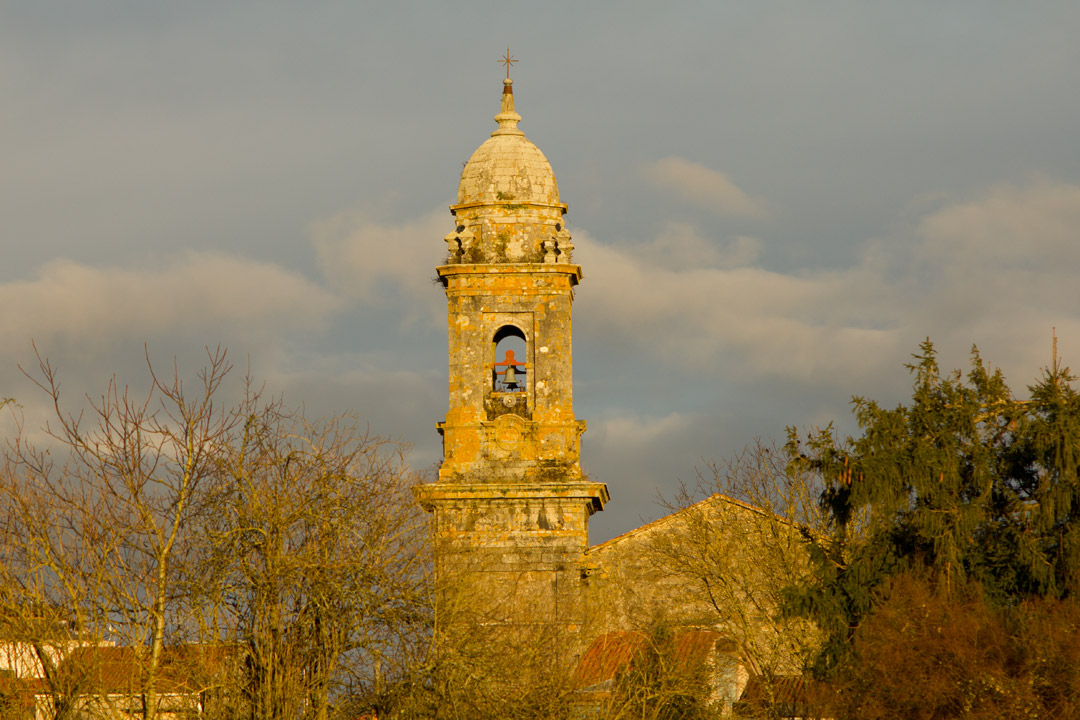 It also dates from this time the main façade of the church, placed on the side facing the square. It reflects typical features of the time in the Baroque style of Compostela. 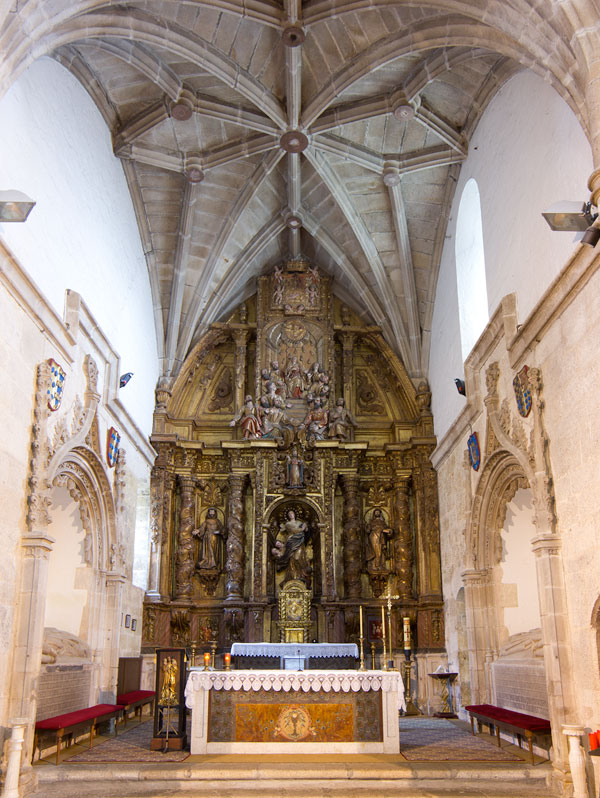 Also dated from the 18th century, the tower has a square floor, with light buttresses and crowned with a dome divided in eight parts by pinnacles. Its section is similar to the one found in St. Francis, in Santiago de Compostela.

Inside the church, we have a magnificent Baroque altarpiece in the main altar, a work by Francisco de Castro Canseco, one of the great sculptors in the Galician Baroque of the second half of the 17th century and of the beginning of the 18th century. It appears a representation of the narrative of Pentecost on the central part of the cornice and the shield of the Franciscan Order placed on the back. 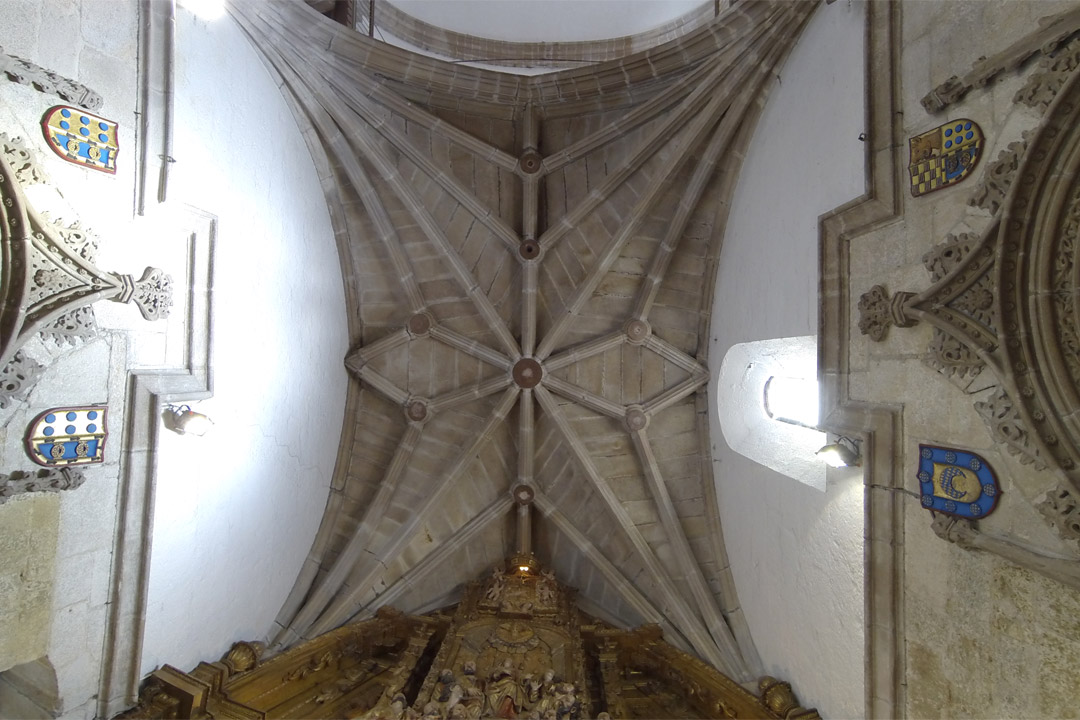 Apart from the Gothic ones, other Medieval sepulchres are preserved in the main chapel. Among them, we shall point out the one representing Alfonso Vázquez de Insua, dated from the 15th century and placed in the ancient chapel of Santa Catarina, where we can now find the altarpiece of Jesus of Nazareth. 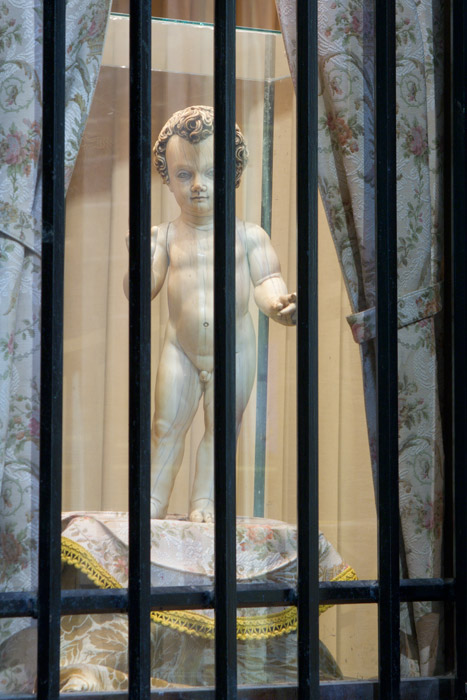 To the west of Convento Square, there is a Baroque country house with its chapel, the San Antón Obra Pía, which was founded in 1671 by the archbishop born in Melide, Mateo Segade Bugueiro. The family owned both the house and its pieces of land. It is also going to be known as the Colegiata, because it had a teaching purpose in origin, and, in the 19th century it would be known as Corvera Marquis’ country house. From the year 1960 it is the town hall. 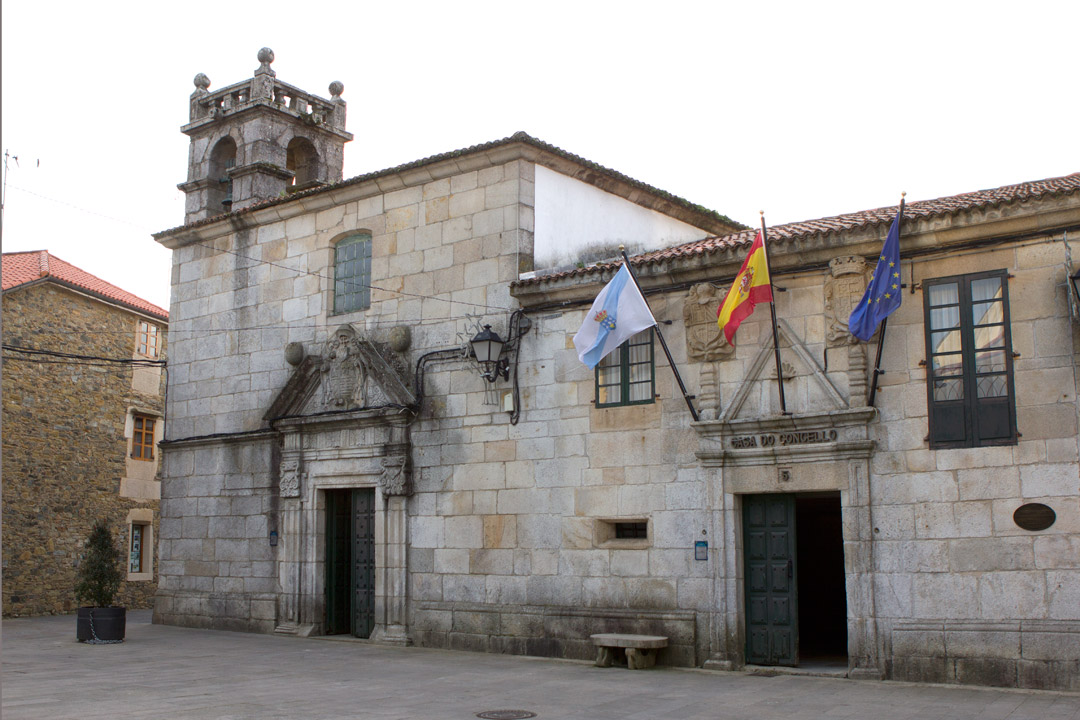 The ground level was intended for stables, wine cellars and other rooms, and the first level was used for classrooms and housings. Nowadays, it is only preserved the façade of the building, since its inside was destroyed, losing the ancient stone stairway, the layout of the courtyard, as a kind of cloister and the other rooms in order to adapt it to new purposes. 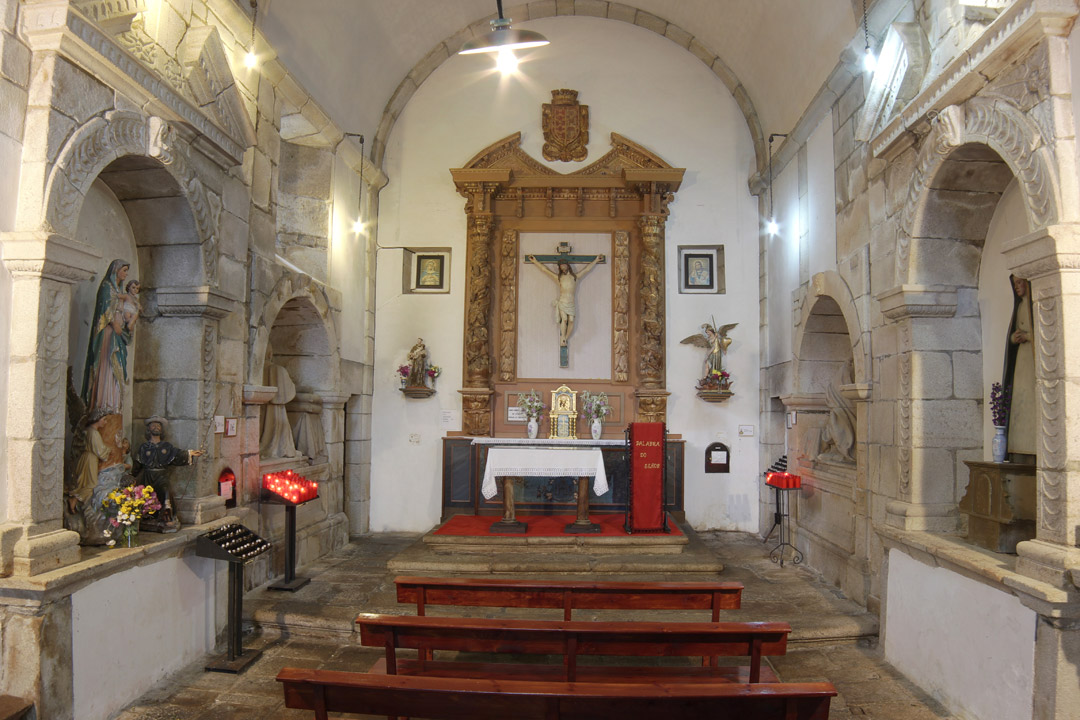 The design of the façade of the chapel, Baroque in style, is attributed to Domingo de Andrade, the most prestigious Galician architect in that time. It consists of pilasters, plain capitals and a dintel with keystones, which bears the weight of a split façade. On the tympanum, it stands out the coat of arms of the founder archbishop. The ground plan of the chapel is rectangular, with a half barrel nave. The first section is partially covered by the wooden gallery. On the first stairs of the stairway, we have a slim column with base and capital typical of Middle Ages, which can be considered as a kind of archaic thing, or even a Medieval piece coming from the other building.

The two Baroque and stony worshipper statues were sculpted in granite in 1674 by Mateo de Prado, one of the most important sculptors of the time. The one on the right represents a knight, Antón Varela Segade, the first owner of San Antón Obra Pía, dressed with the typical clothes of the time. On the left, we find a cenotaph with a worshipper kneeling figure, with ecclesiastical clothing, which remembers the figure of Mateo de Segade Bugueiro. 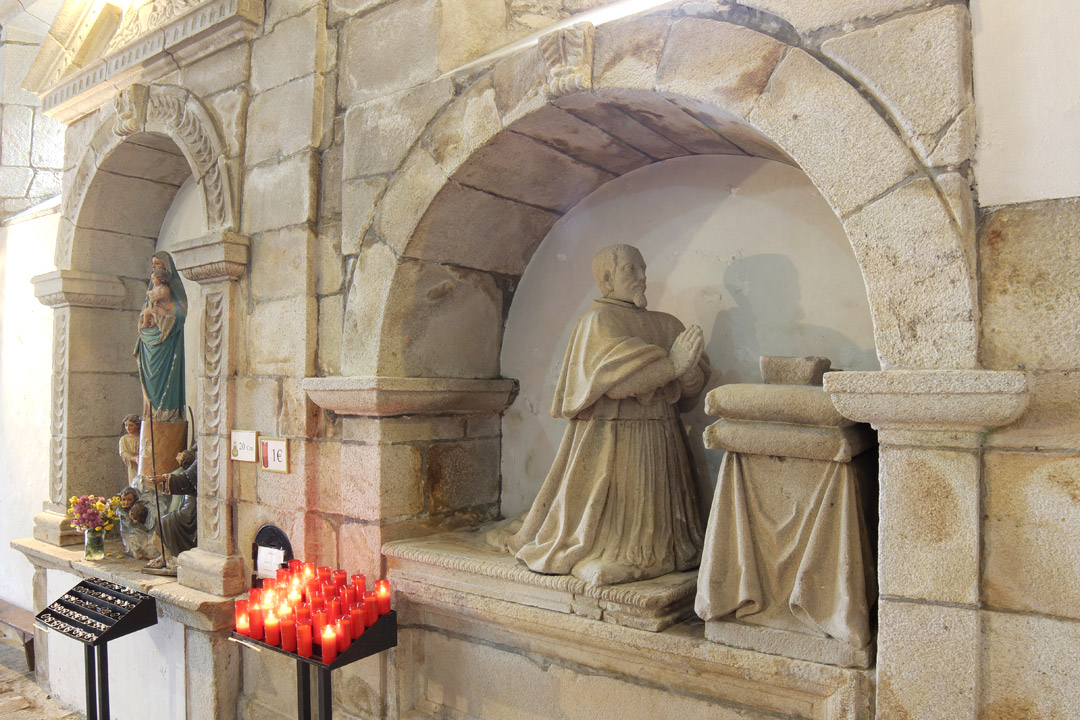 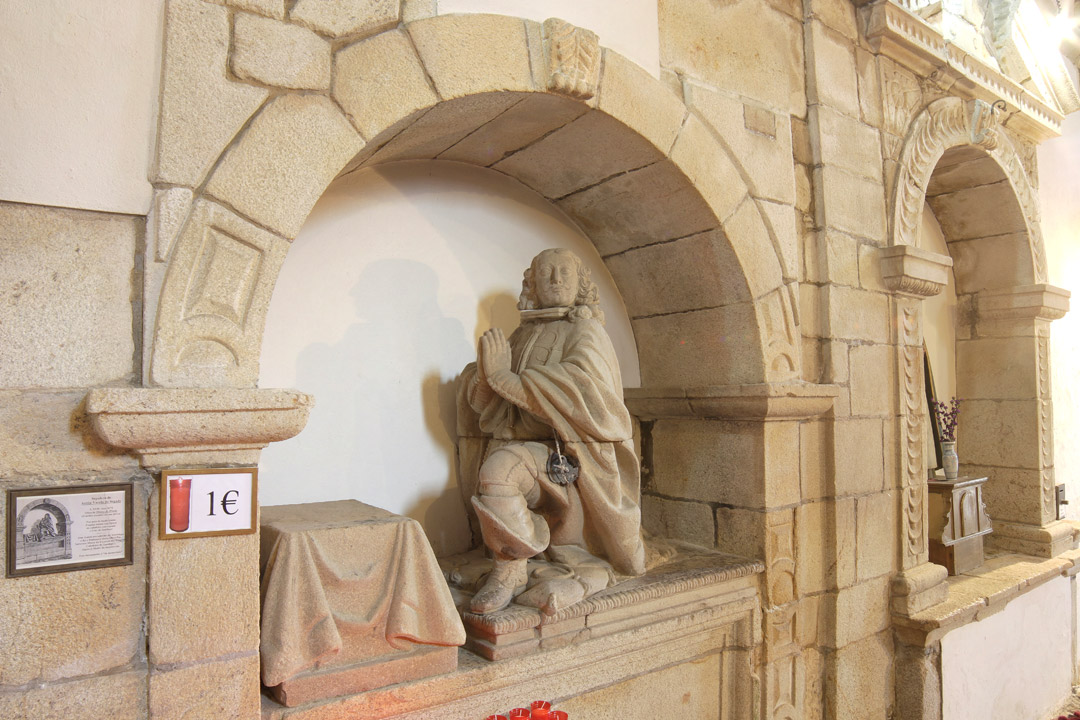 The other remarkable monument in the surroundings of the square is the Terra de Melide Museum. It was designed by the arquitect from Melide Xulio Álvarez and it was built over a 15th century hospital of pilgrims. It still preserves its façade dated from 1502. The museum is an excellent example of the integration within the monumental zone, obtaining the dialectic between the new and the ancient.

At the top of a prerroman fort, at the same place where the Medieval castle was built, it is placed in 1741 the Carmen Chapel, which was built by Blas Núñez de Segade, priest of San Antón Obra Pía, with the help of all citizens of Melide. The ground plan of the church is rectangular, with a triumphal semicircular arch. The façade has a flat front that finishes in a split triangular frontal. In the middle of it, there is a vaulted niche, surrounded by pilasters, which contains the image of the Virgin of Carmen with Baby Jesus and also San Simón on his knees. 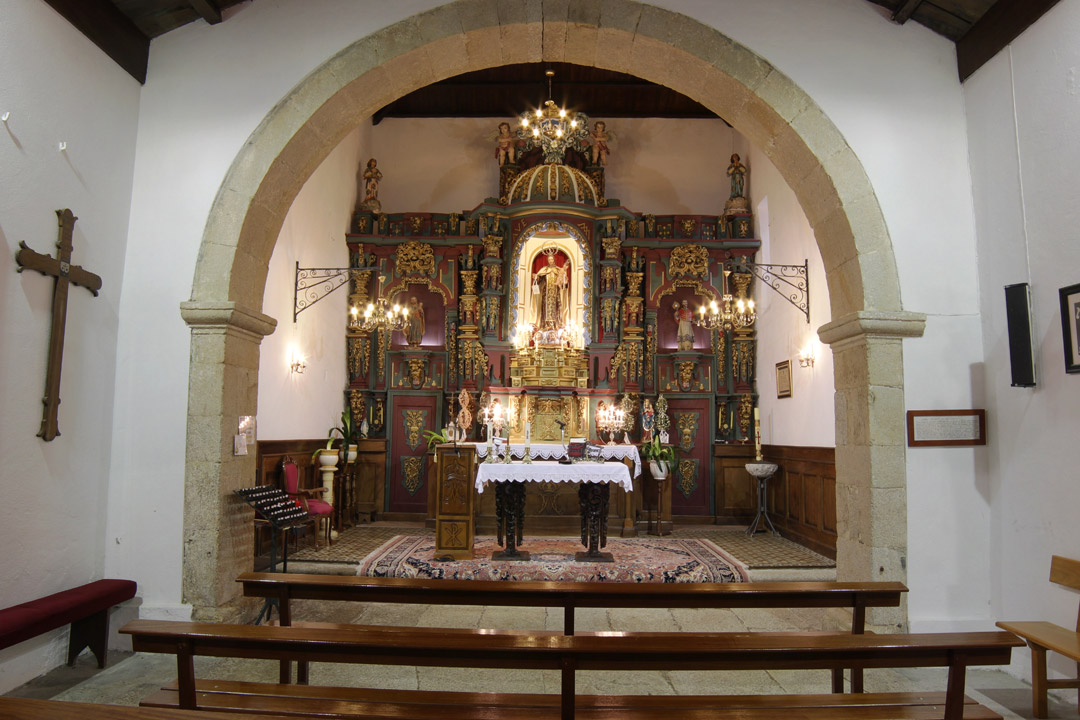 An altarpiece created in 1755 stands out inside. In the central niche, which stands out in comparison with the sides, there is an extremely beautiful image of the Virgin of Carmen, dated from the end of the 18th century, which was attributed to Gambino-Ferreiro’s workshop in Santiago or to its disciples. The image is flanked by the status of St. Ramón Nonate and St. Xosé, both also dated from the 18th century. 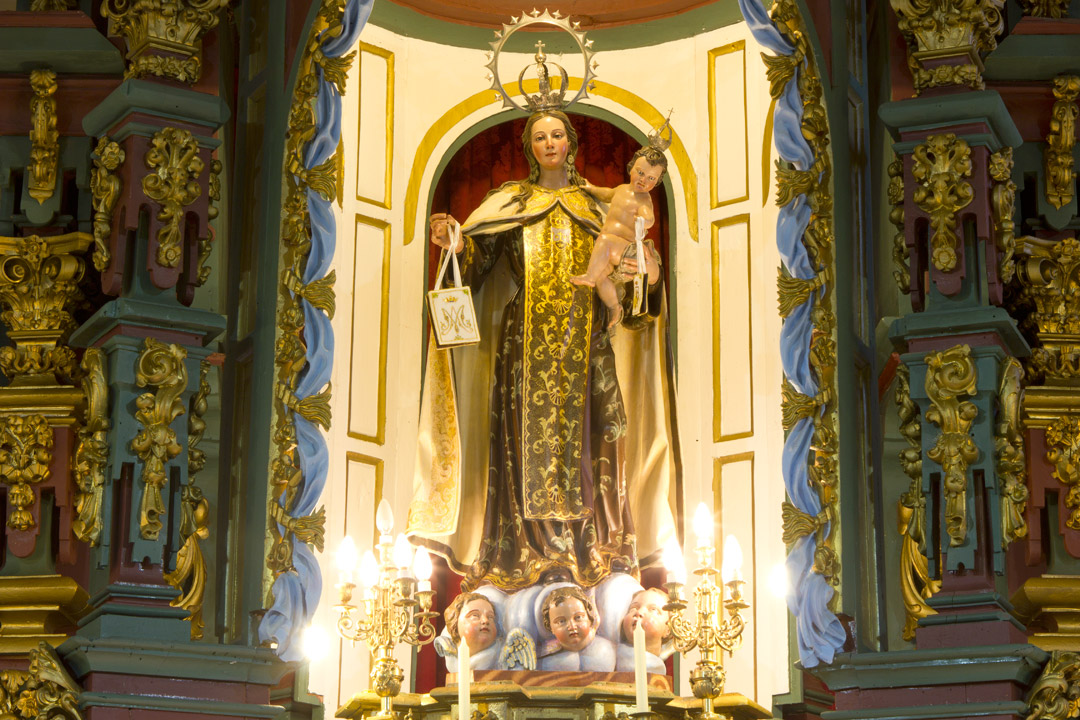